Before I begin the blog this week I want to thank all of you who recommended Lessons from Matthew & Isaac for the About.com 2013 Readers Choice Awards for Best Parenting Blog. You now have until March 19 to vote Lessons from Matthew & Isaac alongside four other wonderful blogs. You may vote once per day. After seeing the results from the first week it appears that I may be a small fish in a very big pond! I am not as concerned about the votes as I am bringing awareness to CHARGE Syndrome and praise to the one who deserves it! May God continue to be glorified. Vote early and vote often! The link appears just to the right of this post in the right-hand column. 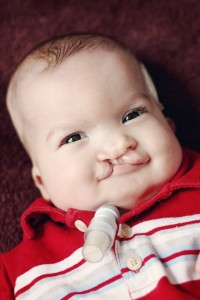 We had a very tender moment this week that reminded us that our entire life, everything we experience and our subsequent response is entirely influenced by our perspective. What we see with eyes is not always how we interpret was is before us. Very early on as we embraced the fact that Isaac was likely going to be as challenging if not more than Matthew, we tried to prepare Sarah Anne for the birth of Isaac and how he may look a little different from her little babies. We explained what a cleft was and showed her pictures and shared that Isaac may have to spend some time in the hospital after he was born. None of that really mattered as Isaac joined us almost 10 months ago. To her he was “Isaac, my baby brother.” Her most used comment: “He’s soooo cuuuute!”

We have been waiting and preparing for when Isaac’s complex little body, with his many issues, would be healthy enough to begin the process of repairing his cleft lip and palate. We were informed that he is indeed healthy enough to proceed but the first available opening was not until the end of May or June. Well, this week we received a call that Isaac’s case was being bumped up. He is now scheduled for March 26. The first surgery will be to have a “nose job” to repair his flat nose and to re-align some his facial muscles. This will be the first of 3 or maybe 4 as they move from the nose to the palate and then to the lip.

We were sharing this news with Sarah Anne a few days ago and when we excitedly shared that Isaac was going to have the hole in his lip repaired, Sarah Anne’s puzzled response was: “Isaac has a hole in his lip?” Then came the tears moment as we explained that fixing his lip (and palate) will help him eat and breathe better, she added as she started to sob: “But, he’s so cute the way he is, I don’t want you to fix him!”

“If you think of this world as a place intended simply for our happiness, you find it quite intolerable: think of it as a place for correction and it’s not so bad. Imagine a set of people all living in the same building. Half of them think it is a hotel, the other half think it is a prison. Those who think it a hotel might regard it as quite intolerable, and those who thought it was a prison might decide that it was really surprisingly comfortable.” C.S. Lewis, God in the Dock

Do you see a set-back, a disability, a disfigurement, etc. as a hotel or a prison? I think we are comfortable in saying that our family has the perspective, according to the C.S. Lewis quote above, as coming from the “prison” side. We do not think of this place as intended for our happiness…if we did, we would be pretty disappointed as if expecting a glorious hotel. No, we accept that this current state is a prison and find many opportunities and moments when it can be surprisingly comfortable than expected. It is not always easy to see at first, but God’s fingerprints are all over the events in our lives…even though it may seem as if we are in a “prison”, His light permeates those walls if we make those walls transparent.

My prayer this week is that I will see through different eyes. I pray that I would see beyond blemishes and see the beauty that you have created. I pray that I see beyond sins of others and love as I am commanded. I pray that my will is conformed to God’s will, not the other way around…May my prayer be of that of Blaise Pascal:

“I ask you neither for health nor for sickness, for life nor for death; but that you may dispose of my health and my sickness, my life and my death, for your glory … You alone know what is expedient for me; you are the sovereign master, do with me according to your will. Give to me, or take away from me, only conform my will to yours. I know but one thing, Lord, that it is good to follow you, and bad to offend you. Apart from that, I know not what is good or bad in anything. I know not which is most profitable to me, health or sickness, wealth or poverty, nor anything else in the world. That discernment is beyond the power of men or angels, and is hidden among the secrets of your providence, which I adore, but do not seek to fathom.” Blaise Pascal